Do you use Kerosene North West?

It is estimated that around 1.5 million households still use Heating Oil. Kerosene North West is sometimes used to describe Gas Oil or Kerosene, for this blog we will focus on Kerosene. This is because most domestic homes using Heating Oil use Kerosene. Kerosene can also be known as paraffin, Heating Oil, 28 second and boiler juice. Kerosene is used to power and fuel both commercial engines and machinery as well as powering home heating systems. Kerosene is the UK’s favourite fuel and is the first choice for properties relying on Heating Oil for their home.

Heating oil is generally a clear and thin liquid with a density of 0.81gmc3.

Where does Kerosene North West come from?

Modern Heating Oil is produced from the distillation of Petroleum. When the Petroleum is heated between 150 and 275 degrees it starts to break down the Petroleum into separate components. The lighter hydrocarbons rise to the top and the higher boiling point components stay at the bottom.

It is at this temperature window that the Kerosene is collected. This means that the accuracy of the distillation process is immensely important.

In the past Kerosene was extracted from fossil fuels such as coal, oil shale and wood but modern Heating Oil is now predominantly extracted from Petroleum.

Once the Kerosene has been extracted it is then sold to fuel distributors such as Craggs Energy. This is then usually supplied to homes and businesses throughout the UK using specialist distributor networks. www.tanktopper.co.uk supplies Heating Oil throughout the UK and is able to provide a competitive price and excellent service. If you are looking for a family run independent fuel supplier that can give you a personal and efficient service then contact Craggs on 01422 882500 and if you require emergency fuel call 01422 888400.

The History of Kerosene

Kerosene has been produced since 1846. Before the invention of electricity, Kerosene was the whole planets main way of heating and lighting people’s homes and businesses and this is why most people call it Heating Oil. The very first Kerosene distributor started in 1851 and was called ‘Kerosene Gaslight Company’. Kerosene stood as the most important refinery product until Gas grew in popularity and availability in the 1920’s.

What is Kerosene North West used for?

Heating Oil can be used in a number of different pieces of plant and machinery throughout industry. Domestically it is used in homes throughout the North West and the UK. Kerosene is a versatile fuel that can power very small pieces of machinery all the way up to large engines used in the aviation industry.

Heating Oil burns clean and has a low carbon monoxide risk. There are ways to improve the efficiency of Kerosene this is usually done by mixing and additive with the fuel. At Craggs Energy a special mix of additives have been created for all our fuels. KeroKlene allows for a cleaner more efficient burning process and is added to the fuel at minimal cost. If you are going to use Kerosene in a range cooker like an Aga you should add the RangeKlene additive this will help lower the maintenance cost of your oven.

Kerosene North West can be called a multiple of names. You will often hear names such as 28 second, heating oil, boiler juice and even Kero. These are all the same products and there is absolutely no difference between them. Heating oil is the most common term used when ordering domestic fuel to customers’ homes however kerosene is the industry standard term.

Many homes in the North West still are not plugged into the national grid for the supply of gas. This means there are still a large number of homes running on Kerosene North West. This can seem like an old fashioned fuel source. It is actually a very efficient way to heat your home and this is even more so evident because the price of heating oil is now at a four year low.

It is now estimated that the efficiency of kerosene is up at around 90% and in some cases it can even be higher. When this is compared to gas which as an efficiency rating of 77% it shows that now is a good time to be heating your home with Heating Oil.

Order your Kerosene North West online. Just fill in the form to the right. 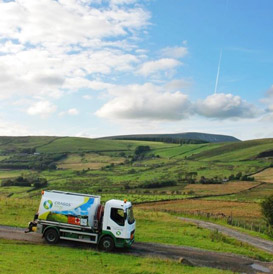